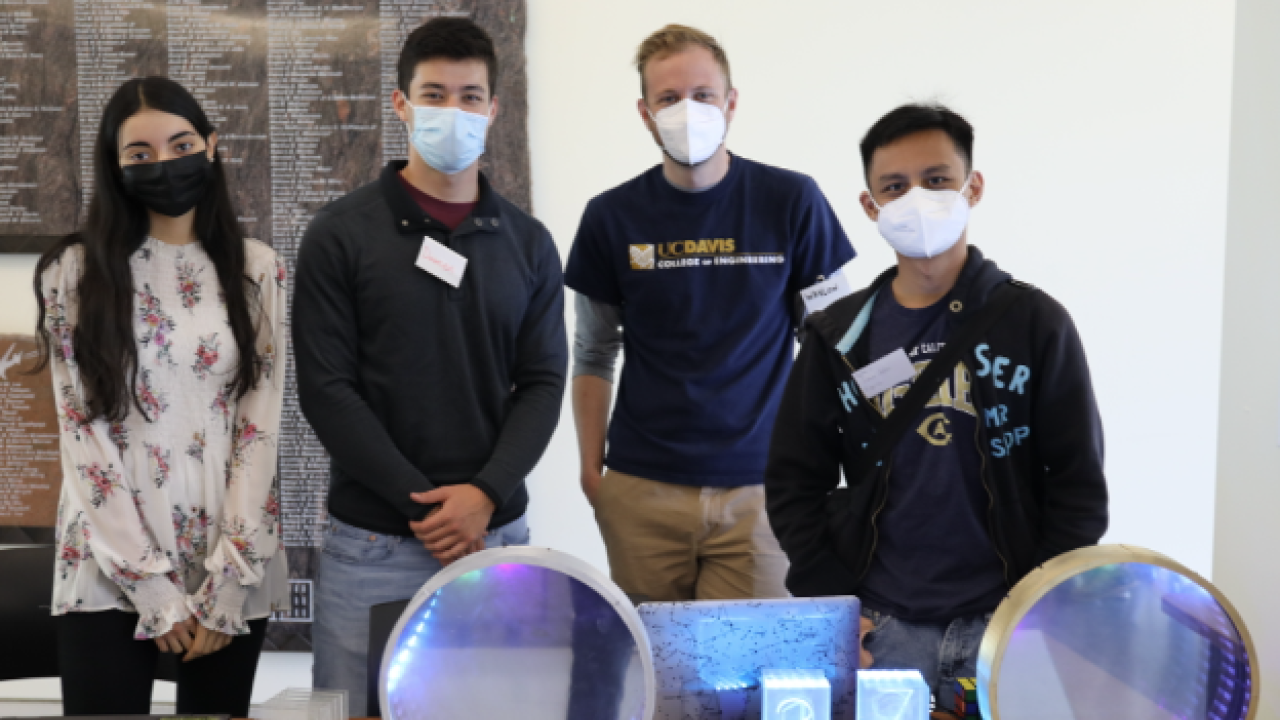 A Re-Emergence of Picnic Day and EE-Emerge

In 2022, after a two-year hiatus, UC Davis students, faculty, staff and members of the surrounding community were finally able to come together to partake in the annual open-house celebration of Picnic Day that celebrates all things UC Davis. In addition to the re-emergence of the famed dachshund races and chemistry shows, attendees of the 2022 Picnic Day also enjoyed the innovative and interactive demonstrations of the Department of Electrical and Computer Engineering's EE-Emerge program.

EE-Emerge is a program within the Department of Electrical and Computer Engineering that gives UC Davis undergraduate students, particularly students from historically underrepresented-minority and first-generation students, the opportunity to engage in a hands-on team project during their junior year. The EE-Emerge program, supported by Texas Instruments—a global leader in semiconductor and integrated circuit technologies, is structured around a three-quarter sequence where students learn how to take an idea from conceptualization to design and then to presentation. Each phase introduces students to aspects that are part of engineering but are typically not taught in conventional classes and labs.

The students work in teams to apply those learnings to create interactive demonstrations that are shared with the community during Picnic Day. The process teaches the students how to hone their communication skills and develop interpersonal skills necessary to work within a team and prepares them with the skills needed for senior design projects and internships.

“The EE-Emerge program is a valuable program because it provides students with the opportunity to apply concepts they’ve learned in the classroom during the past three years into tangible projects. Plus, they have to develop their scientific communication skills because they have to explain their work to members of the public,” said Department Chair and instructor of EE-Emerge, Professor André Knoesen. “The students often don’t even realize how much they are learning because they are having so much fun.”

This year’s four projects included a candy robot, an Inspector Gadget-inspired robot hand, an interactive clock and an AetherHarp.

More about the 2022 EE-Emerge Projects and key student take-a-ways: 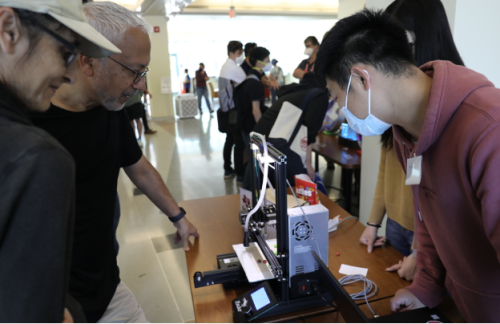 The objective of the candy robot is to repurpose an off-the-shelf 3-D printer to perform a different task. To demonstrate how colored candy pieces can be sorted, the printhead was removed, and a camera was added to image colored candy on the build plate of the 3-D printer.  The camera module records the location of colored candy. It directs a pneumatic vacuum pickup movement and the build plate to select and move a candy of a specific color to a designated area. 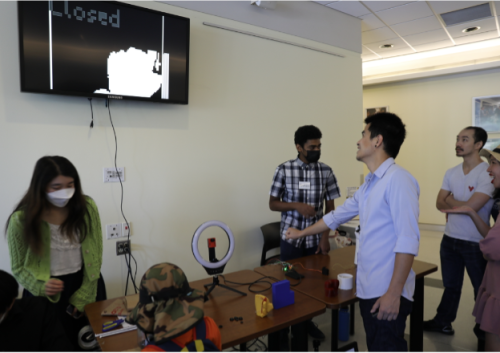 Inspired by a remote-controlled, robotic foot from the famed cartoon Inspector Gadget, the team developed a robotic hand. Using an off-the-shelf camera module and a machine learning framework, human gestures are recorded and processed to classify what hand gesture is being presented to the camera. After classification, the hand gesture is mapped to a robotic hand.

“I really enjoyed talking about how we made the hand, especially with the children who were much more interested than my initial expectations,” said student Brian Nguyen. “Seeing the children really interested and invested in hearing about how our project works and asking questions and then getting to help them build their own hand to remember our project was really moving.” 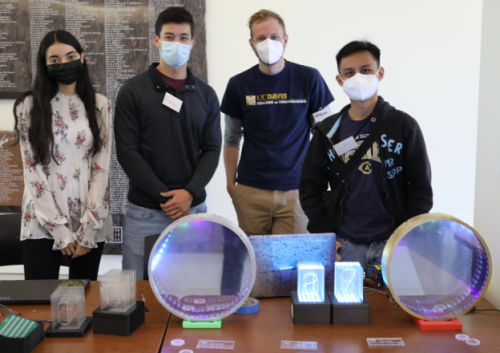 Inspired by the different ways humans have developed to keep track of time, the team, Interactive Clock, created two methods for displaying time: one analog and one digital. The analog clock utilizes three rings of LED lights, with each ring corresponding to hours, minutes and seconds. Then, using a series of mirrors, the LED light rings are reflected and create an infinity illusion, which in turn creates the illusion of an extended third dimension in space.  The digital clock was derived from a Nixie vacuum tube to display the numbers. Vacuum tubes require large operating voltages; however, this clock instead uses a low-voltage driven LED and light scattering to create a visual display similar to Nixie tube display.

“I didn’t expect the general public to be so fascinated by our project,” said student Sabrina NoorAhmad-Yarzada. “Many people I spoke to did not have any previous experience or interest in engineering; nevertheless, they were blown away by our project and asked many questions about it. I was so happy to be able to explain how it was constructed and watch them learn about engineering.” 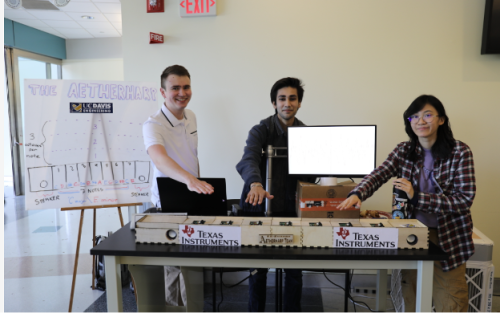 AetherHarp is a musical instrument that uses infrared distance sensing modules to detect the position of a hand to play a note. Utilizing Bela (a platform for ultralow latency digital audio creation) allows sensing from infrared sensors to produce an octave of sound representing a harp. In addition, the Aetherharp was designed to take advantage of laser-cut material and be modular so the design could be expanded and be implemented into a more advanced instrument.

“There were some participants who played the instrument in interesting ways that I had never thought of before to produce some sounds I didn’t know the harp could produce,” said student Thomas Wicklund. “People who had very little insight into the inner workings of the instrument were able to invent new ways to play it.”