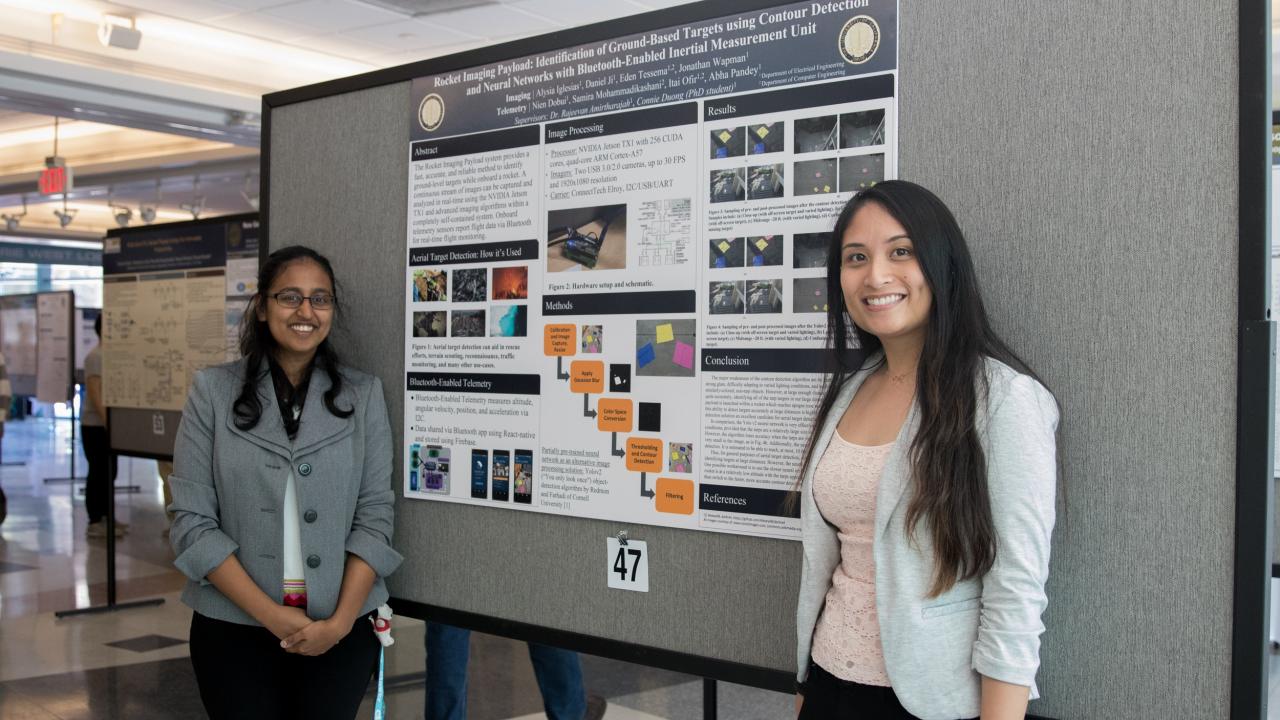 There were three team winners for the IA Symposium Poster Contest:

The process began with Alysia’s interest in aerospace.  She involved herself with different clubs in mechanical engineering on campus and connected with a team that wanted to build a rocket for a separate contest.  Quickly recruiting close friend and classmate Eden, together they led their group to design a rocket payload able to scan the ground for targets for their senior design project.

Originally, they were building the rocket for a NASA competition.  They started conceptualizing the ideas and developing some of the algorithms over winter break, a few weeks head start compared with the other senior design projects.  However, they had some setbacks due to funding in the rocket side and resulted in not being able to bring their rocket up to a level needed for the competition.  Despite their setbacks, the team was fully supportive of each other and the project concept, so they pushed forward with what they had.  They adapted to the unfortunate situation in order to finish the project.  In the end, their hard work and efforts allowed them to win second prize for their poster at the symposium and create many industry connections as well.

Getting to this moment was not easy for Alysia and Eden.  Alysia had the dream of working for NASA one day and Eden wanted to be different from her brothers who pursued software.  They made their own paths by studying electrical engineering, a first in both of their families.  Both transferred from community colleges run on semester system.  When they first came to UC Davis, also the time when they met each other, they were overwhelmed with the fast-paced quarter system.  During their interview for this story, the two strongly stressed the journey was tough.  Their confidence as students was challenged.  There were many bumps in the road while drowning in stress, but they had their goals in sight at the end of the road.  “My past failures are a way to build me up in order to succeed,” Alysia says.

The main lesson they have taken from this experience is teamwork.  As team leaders, it was important for them to lead with effectiveness and efficiency.  At the same time, they learned how to balance trusting the team and making sure they were all moving towards the same goal as a team.  They strongly emphasized the project was a team effort and it was not possible without the help of every single team member.

Alysia and Eden and their team are both appreciative of the support they have received from the department, whether it may be through funding or simply the amount of time people have invested into their group.  They are also very appreciative of their professors, specifically Professor Rajeevan Amirtharajah, Professor Andre Knoesen, and Professor John D. Owens.

The future is bright for Alysia, Eden, and the rest of the team members.  A couple of them have jobs lined up after graduation, including one at NASA Jet Propulsion Laboratory.  Eloquent and passionate at what they do, Alysia and Eden are sure to continue achieving great things and will find great success after graduation.

Photos from the symposium are available on the College of Engineering’s Flickr.