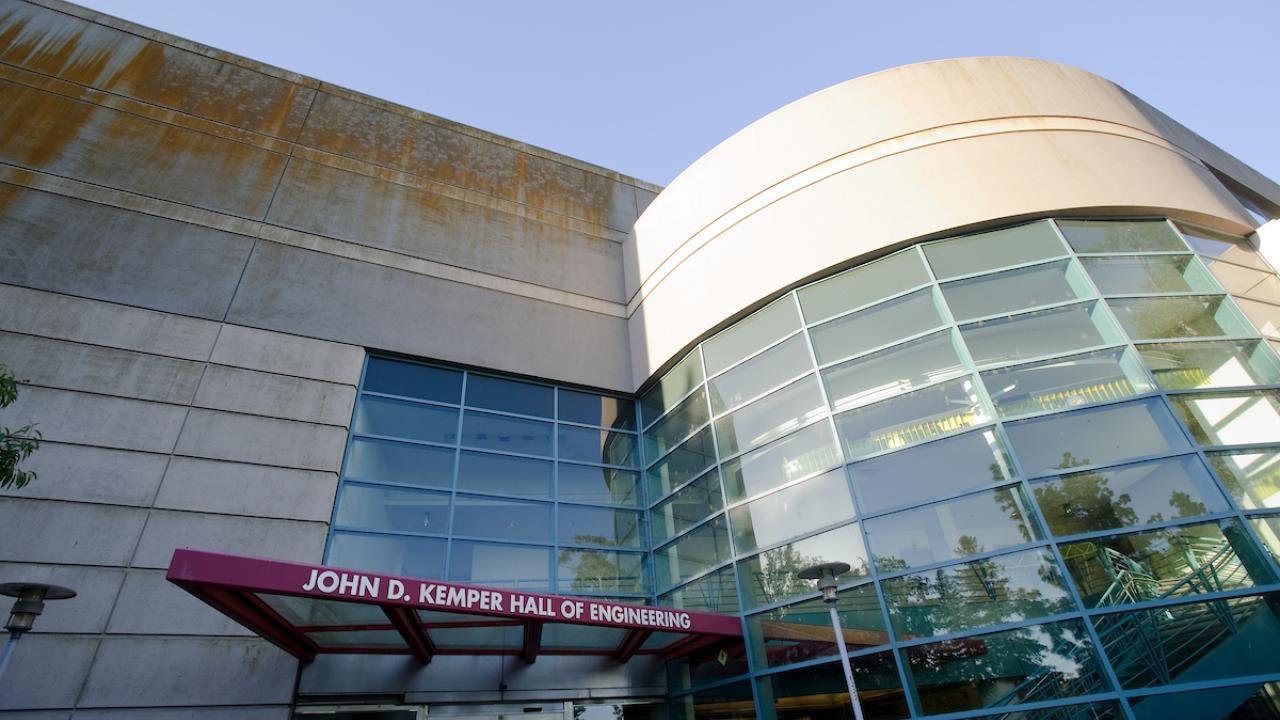 The UC Davis College of Engineering annually recognizes the academic achievements of undergraduate student with awards and department citations for the school year.  Students are recognized for their demonstration in leadership, academic achievement, and service both in and out of the classroom.  This year on May 30, the college honored electrical and computer engineering citations to four undergraduate students:  Mark Bourkov, Kyle Goff, Yuanyuan Xiang, and Sarvagya Singh.

Mark, an electrical engineering major, transferred to UC Davis from Folsom Lake College in 2016.  He excelled right away earning a spot on the Dean’s List for the first time that Fall. While an undergraduate he completed multiple engineering projects including the design and simulation of a 2-Stage CMOS amplifier and was a member of a team that developed a Vertical Hydroponics System.  He was admitted into the Integrated Degree Program, a 5 year B.S./M.S., in Electrical and Computer Engineering as a junior and began taking graduate level courses his senior year. He plans to attend graduate school at UC Davis and study Analog Circuitry.

This award holds great meaning to Mark.  “I was an average student when I was going to high school,” Mark says.  “Once I started to learn about circuits and electronics, I really started to take the subject serious because I really enjoyed what I was doing.”  Receiving this citation helps Mark remember that he can excel in a field that he truly enjoys working in.

Mark’s interests in electronics and computers helped pave his path to becoming an electrical engineer.  From his first circuits course at Folsom Lake College to creating a control system with his good friends Issam Abdulrahim and Nick Alvarez for their Senior Design Project at UC Davis, Mark devoted more and more time into the subject and worked hard to succeed.  At UC Davis, he appreciates being surrounded by many colleagues, both students and professors, who were very kind and helpful and big factors that impacted his success.

Kyle is a senior who will graduate with a Computer Engineering degree.  He attended Santa Rosa Junior College before transferring to UC Davis and has never earned a grade lower than an “A-” during his entire undergraduate career.  While exceling in the classroom Kyle also worked at UC Davis C-STEM as the physical computing lead and was a hardware and firmware designer for the UC Davis Formula Racing SAE team.  While at Santa Rosa Kyle was a Teaching Assistant for intermediate algebra college students. After graduation has a job lined up at a startup company, Kazan Networks, doing digital circuit design.

Sarvagya is graduating near the top of his class in Computer Engineering. During his time at UC Davis Sarvagya was a member of three research groups one that developed a performance analysis tool using Python for software application of ASAP class processors. He was also part of a team that implemented hyper-dimensional memory systems on FPGAs using Verilog that emulate the human memory. He was a Teaching Assistant for ECS 20 and a grader for various other computer science courses.  He interned at Form Factor over two summers winning Best Intern Project in 2017.

Fascination led Sarvagya to study computer engineering and pursue a career in this field.  Growing up, he was inspired by the field of embedded systems and technology.  He also liked how computer engineering is a recent field in engineering and has plenty of room for development.   Sarvagya encourages underclassmen to be more involved in their undergraduate programs and work to the fullest of their potential.  Earning this citation has encouraged him to continue working hard and believes that it will also do the same for others.

In addition to research and school, Sarvagya credits the boxing club as an impactful part of his journey at UC Davis.  He made new friends who pushed him to get out of his comfort zone, do better than his capabilities, and most importantly, stood by his side.  Sarvagya became a healthier and more motivated person, which resulted in a better performance at school.  He believes that his experience encapsulates the essence of Davis community where we all coexist to make each other better.

When asked about his post Davis plans, Sarvagya said, “After my graduation, I am looking forward to joining the industry before heading to graduate school. The idea is to discover possible fields of technology that have innovative potential in the imminent future. I plan to use my education at UC Davis as a basis to discover what technology has to offer to the world, and then invest in making these ideas a reality for a better future for everyone.”

Yuanyuan will graduate with a double major in Electrical Engineering and Computer Engineering. While at Davis Yuanyuan participated in EE-Emerge, a project based opportunity that highlights electronic exhibits at Picnic Day.  Her team designed an interactive LED board to showcase to the public. She is also a member of a research group that implemented applications for many –core processors and implemented fixed-point dividers using SRT division. Yuanyuan choose to take graduate-level coursework as a senior in preparation for continuing onto her Master’s Degree in Electrical Engineering at UCLA in the Fall