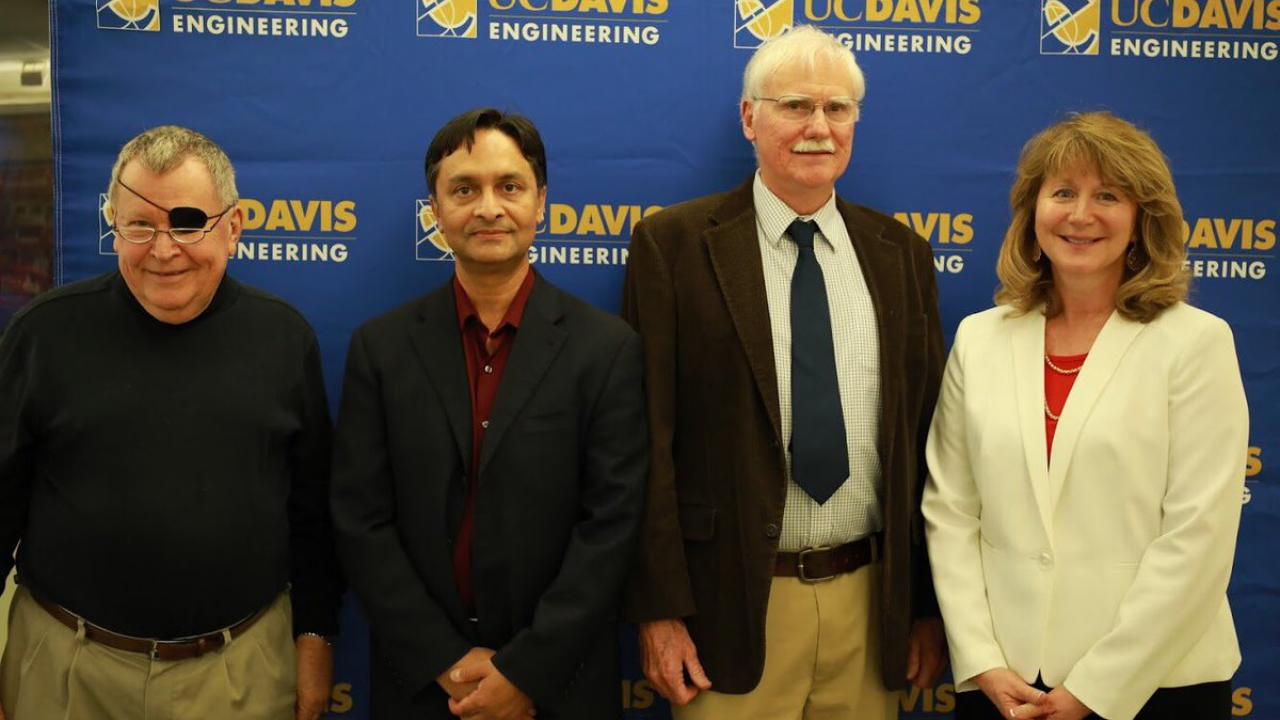 The Electrical and Computer Engineering Department takes pride and honor in announcing that Professor Jonathan P. Heritage has been elected to the National Academy of Engineers (NAE).

This is one of the highest professional distinctions awarded accorded to an engineer for their lifetime of dedication and commitment to their field. As a tribute, the ECE Department held a reception Feb. 25, 2019, in the Kemper Hall Lobby in honor of our distinguished professor for being an innovator, a teacher, and the backbone for the department and students for 28 years.

This well-deserved honor is in recognition of Professor Heritage’s seminal contributions to the field of photonics. His election was for his contributions to “optical pulse shaping and wavelength selective optical switches." He holds the original patent on “Multi-wavelength Cross Connect Switch” which later provided the basis for high speed Internet.

Prof. Heritage completed his M.S degree in physics from San Diego State University in 1970 and Ph.D. in Electrical Engineering from University of California, Berkeley, in 1975. He was an Alexander von Humboldt Stiftung Postdoctoral Fellow at the Physics Department of the Technical University of Munich, Munich, Germany. Prior to joining the ECE Department as a faculty member, he served eight years at Bell Labs and seven years in Bell Communication Research, where he was the Distinguished Member of Professional Staff.

He joined the ECE Department in July 1991 and later served as a chair of the department from 2000-2003. Currently he is  Professor Emeritus with the ECE Department and has continued to be an active member. This reception bore witness to the respect that he has earned from people within his field, faculty members and students.

Professor Saif Islam spoke about his remarkable work in the field of optical communication, the awards and recognition he has earned most importantly how great and loving he is as a person and stated that “...though this reception was meant to be an ECE event because ECE people love him, but colleagues from the other departments also wanted to express their love for Prof. Heritage by participating in the event, that’s how it became a College of Engineering event. We all love you, Prof. Heritage.”

Then Prof Jerry Woodall introduced Prof. Heritage’s work and contributions in the field of optics:

"Heritage invented picosecond optical Fourier pulse shaping and wavelength switches while at Bell Communications Research; along with Andy Weiner, he extended the technique to femtosecond time domain. This invention was the monumental advancement in the optical signal generation as it enabled for the first time full modulation of the terahertz bandwidth laser pulses. This was accomplished by amplitude and phase modulation of the optical spectrum spatially dispersed by gratings in a dispersion free configuration. While  at UC Davis, Heritage co-invented the optical wavelength selective switch (WSS) which is widely employed in core of the commercial Wavelength Division Multiplexing (WDM) terabit capacity optical fiber networks. A typical WDM system would incorporate 40 channels and 100 GHz spacing. WDM systems which incorporate WSS are profitable to telecommunication companies because they allow to simply switch-in expanded capacity without needing to lay more fiber. Prof. Heritage’s WSS is data protocol independent and consumes low power compared to an electronic switch. These powerful attributes led the University to award an exclusive license to a major WDM optical component supplier company. That company enjoyed a market value close to 3/4 billion dollars for over 15 years. This license was listed for eight years among the top 25 highest earning licenses for entire UC system, making it one of the most successful engineering licenses at the University of California. Prof. Heritage recognized the need for the wavelength selective optical switch with his colleagues, which is now a critical enabling component of a high capacity Internet backbone that we enjoy today! He was the man! There is nothing more rewarding than to watch a colleague get the reward of his deserving labor.”

The reception was an amazing platform where people from all department bonded with each other over food and drinks. The ambiance was filled with pride and happiness for Prof. Jonathan Heritage’s work which led him to be a part of NAE.

The reception ended by congratulating  Prof. Jonathan Heritage for his noble work in the field of optics, which has led to major inventions in the field of high speed Internet today.