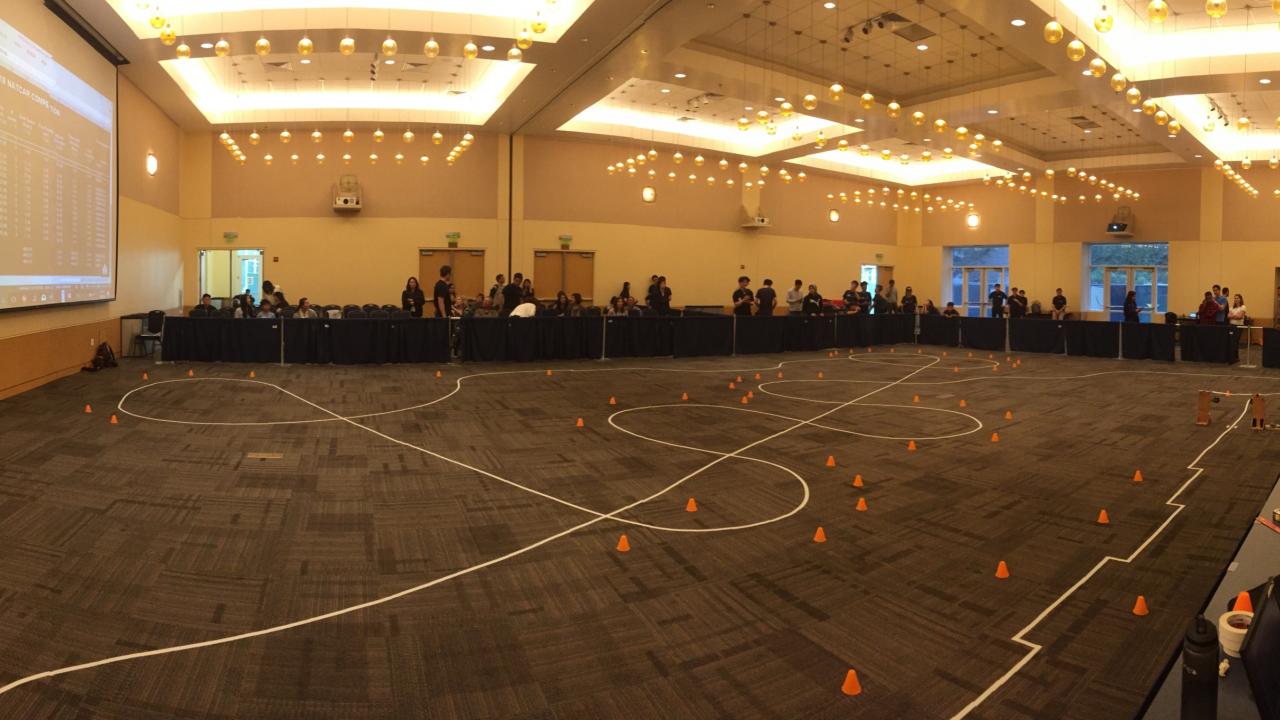 On May 5, 2018, the UC Davis ECE Department hosted the 21st annual Natcar Competition.

Natcar is an annual design contest organized in conjunction with UC Berkeley where teams design, build, and race autonomous cars on a track marked by 1″-wide white tape.  The competition was created with the purpose of providing an amazing educational experience for the competitors.  Students from various schools across California gathered together in the UC Davis ARC Ballroom to compete in the racecar competitions divided into the three categories of undergraduates, juniors, and alumni.

The competition was close, as there was a wide variety of types of cars used and many variable factors in winning the race.  The winners of this year’s competition in the Undergrad Division were Harrison Hsueh and Tze Yang Ng from UC Berkeley.  Their racecar, a 1/10 scale four-wheel drive touring car, completed the track in 31.89 seconds with an adjusted speed of 9.71 feet per second.  Although their car was unable to stop automatically within the required distance at the finish line, the car was the fastest and performed very well with the turns on the track.  Coming in second through sixth places were teams from UC Davis, with completion times ranging from 32.50 seconds to 43.66 seconds and adjusted speeds from 7.09 feet per second to 9.52 feet per second.  Students from UC Davis built lighter and smaller cars of 1/12 scale.  These cars tended to overshoot the turns, but had the ability to successfully stop very quickly.  The remaining cars were made by students from UC Berkeley, UC Sand Diego, Fullerton College, Fullerton High School, Fullerton Junior High, and Fullerton Elementary.

“This was a transition year for us,” says Lance Halstead, the director of the Natcar competition.  “After several years of successfully using a line-scan (1D) camera, many of our teams adopted a more advanced 2D camera and found that they could still be competitive.”  In the future, they hope to fully adopt the use of the 2D camera, as it provides better control over the autonomous cars as well as the opportunity for students to learn the more advanced computer vision techniques.

A highlight from this year’s Natcar event at UC Davis was the representation of schools from the Fullerton district.  Participants ranged from college students to as young as elementary school students.  The junior high and high school students were introduced to the Natcar project and also mentored by Fullerton College students.  This allowed both sides of the parties to have an amazing opportunity to teach and learn the ways of designing and creating a racecar.  The young third graders focused on programming their Arduino-based car.  They were excited and are now determined to improve as much as they can for next year’s competition.

Natcar is a great opportunity for creating new connections with like-minded people from other schools in California.   Students are clearly supportive of their peers and fellow competitors despite Natcar being a competition.  With this mindset, the students can achieve anything they work hard for.

More information about the competition can be found at the Natcar website and on the Natcar YouTube channel.