Catching up With the Şeker Lab: Serendipity and Collaboration

Erkin Şeker, associate professor of electrical and computer engineering, and his team have adapted a pre-Columbian era jewelry making process to create the nanoporous gold they use for biomedical applications. “Depletion gilding [purifying gold by removing other elements] would start with an alloy of copper and gold called tumbaga. Artisans would use a chemical reaction to remove the copper and leave behind the gold, which gives the golden finish to the artifacts. This process would also leave tiny perforations all over its surface, which was only observed after the availability of high-magnification microscopes.” Şeker’s lab does something similar, known as dealloying, starting with an alloy of silver and gold, where silver is selectively removed by nitric acid as gold atoms self-arrange into a sponge. The tiny pores in the gold sponge are only tenths of nanometers wide, roughly hundreds or thousands of times smaller than the width of a human hair. This is the scale on which the field of nanotechnology takes place.

Other researchers, including Şeker as a PhD student, had previously studied these materials’ mechanical properties, including possible chemical catalysis due to their large and reactive surface area. However, Şeker’s lab is among the few groups exploring the biomedical uses of nanoporous gold.

The porous gold can be incredibly useful for neuroengineering as a multifunctional electrode coating for enhancing the detection of electrical signals from the neurons. For example, the surface topography of the nanoporous electrode can be tuned to allow neurons to attach to the electrode while rendering it too unsteady for astrocytes to spread. This reduces the undesirable insulation of the electrode by astrocytes that severely limit the detection of neuronal electrical activity. “A cell stabilizes itself onto a surface the way a person puts up a tent,” Şeker said. “Flat ground lets a tent, or a cell, attach securely, while rocky or hilly ground is less stable – at least for some cell types just like for some tents with a stake layout incompatible with the terrain.”

Nanoporous gold can also allow controlled release of pharmaceuticals with their high surface area-to-volume ratio and well-known methods of functionalizing gold surfaces. Surfaces become increasingly important at the nanoscale dimensions and lead to interesting phenomena that do not exist in larger dimensions. For example, the electrical charge on the nanoporous electrode surface can be controlled so that the porous electrode acts as either a reservoir or an emitter of electrically-charged drug molecules. This can allow for on demand delivery of drug molecules to tissues. For example, Şeker envisions that the rogue electrical activity that may indicate an oncoming seizure can be detected by the porous electrodes and the porous electrode could release the pharmaceuticals just before a full-blown seizure occurs.

The tiny pores of these materials can also act as an intrinsic sieve, filtering large biomolecules, such as proteins in blood, that undesirably block the pores. The size and shape of the pores allows direct detection of nucleic acid biomarkers, that is, small fragments of genetic material found in bodily fluids, circumventing the additional steps before samples can be analyzed. This can help identify pathogens or diseases or enable the isolation of captured nucleic acids for other analyses such as identifying sequence mutations. 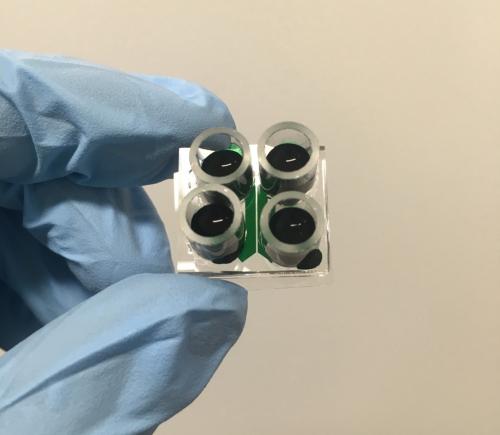 For any application of nanoporous materials, the size, shape, and number of pores play a huge role in device performance. A special research effort of Şeker’s lab, in collaboration with Prof. Jeremy Mason, assistant professor of materials science and engineering, focuses on how the nanoporous morphology evolves when exposed to electrical, mechanical, and thermal fields.

Studying neural cells and how they interface with foreign materials brought neuroinflammation to the research team’s attention. Neuroinflammation plays a role in many conditions, including traumatic brain injury and neurodegenerative diseases. This inspired Şeker, who has past experience with microfluidics to create fluidic analogs of electrical circuit components.

It is difficult to study neuroinflammation in a human or animal body because the biological system is so complicated. In collaboration with Prof. Pamela Lein, professor of molecular biosciences in UCD’s School of Veterinary Medicine, they developed a new cell-based neuroinflammation model which captures both neurotoxic and neuroprotective phenomena observed in vivo. They are now applying this model to study how inflammation propagates in neural tissue and how pathogenic proteins in neurodegenerative diseases are transported in the nervous system. These so-called organ-on-a-chip models have the potential to significantly lessen the need for animal studies by narrowing down the variables that would need to be tested on animals. 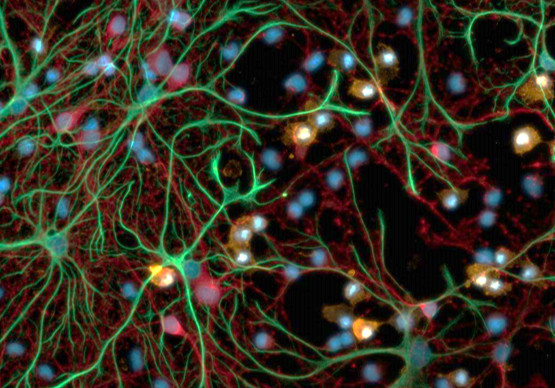 Another new recent research interest is investigating interactions between the gut and the brain. Gut microbes communicate with each other using small molecules, which also interact with the vagal nerve endings in the gut lining and send signals to the brain. Issues with gut-brain interactions are linked to metabolic diseases and some psychiatric and neurological conditions, including depression and Parkinson’s.  A collaborative project, initiated by the UC Davis Microbiome Special Research Program, with Prof. Helen Raybould, professor of anatomy, physiology, and cell biology, and Prof. Maria Marco, professor of food science and technology, focuses on the development of a microfluidic model that mimics the interface between the vagal nerve terminals and barrier cells of the intestinal lining. Once complete, Şeker anticipates that this tool will enable high-throughput screening of metabolites and therapeutics relevant to the gut-brain axis.

Students from different disciplines work in the Şeker lab, bringing unique expertise and learning from each other as their collaborative projects evolve. “I often look back to when I was a graduate student and reflect on what type of mentorship and courses would have helped me the most”, says Şeker. “This informs the new courses that I develop and how I try to mentor my students at the intersection of micro-/nano-technology and life sciences.”  Şeker enjoys the constantly evolving journey of research, where one avenue of inquiry leads to another, making the job exciting and rejuvenating. He considers UC Davis, with inspiring colleagues and students as well as new initiatives such as the Center for Neuroengineering and Medicine, an ideal place for his career.

Prof. Erkin Şeker, an associate professor and former graduate program chair of electrical and computer engineering at UC Davis. He joined the UC Davis College of Engineering faculty in 2011. He is actively involved with several graduate programs and is a recipient of UC Davis - Graduate Studies Distinguished Graduate and Postdoctoral Mentorship Award. He leads the highly-interdisciplinary Multifunctional Nanoporous Metals Lab, which studies nanoscale material properties and innovates micro-/nano-fabrication techniques. Şeker previously received an NSF CAREER Award and an NIH Trailblazer Award, and  participated in National Academy of Engineering’s Annual Frontiers of Engineering Education Symposium, and was selected as a BMES Cellular and Molecular Bioengineering Young Innovator.  He served as an Associate Scientific Advisor for Science Translational Medicine journal and he is on the Editorial Board for Annual Review of Biomedical Engineering.